This week we were testing our new sUAS systems. Firstly, we tested the DJI F450 Naza-M v2 we’ve been running for a while. This should have been a strait forward function test, but it threw up the surprise that the DJI Ground Station software still hasn’t been updated the play nicely with iOS 9.1; this is a pretty poor show from DJI as this is our go-to software for running this platform. Thankfully we can still resort to Ground Station 4.0.11 for Windows.

Second up is our new DJI S1000 with A2 flight controller – without iOS downlink of course! This flies wonderfully in some pretty strong winds, although the DJI Assistant software can’t seem to be coaxed into reliably writing any updates to the unit. Again, the DJI A2 Assistant 1.8 for Windows seems to play nicely. We’re flying this using Futaba rather than Spektrum controllers – I’ll do a full comparison in another blog, but for now I’ll say that I was impressed at some of the features of the system. We stuck a few kilos of dead weight on it and again, it performed well even in high winds – although the no payload flight time (15mins) dropped to about a third of that with a payload!

Lastly we tested our two new 3DR Solo systems. These are fitted with dual MAPIR cameras (one visible, one nIR) for NDVI sensing. These cameras don’t seem to play nicely with either the Samsung Exo or the SanDisk Extreme microSDXC cards I used – I suspect they’ll play just fine with standard 32gb microSDHC cards. I was surprised at just how simple these are to use and how good the range is on the 2.4ghz downlinks, especially the one for live video feed. One of these has a gimballed GoPro Hero 4 on-board with live downlink, although the downlink plays nicely with the MAPIR cameras – we took some photos, obviously. 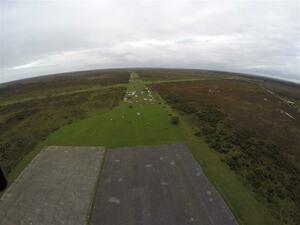 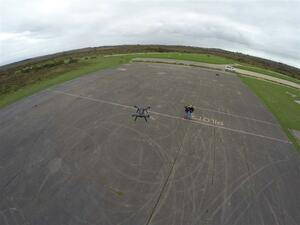